Received documents on conformity of all ALUTECH manufacturing automation equipment for the markets of the Republic of Belarus, Ukraine, EAEU and EU.

Alutech-Sibir LLC received a commendation from the Ministry of Industry, Trade and Entrepreneurship Development of the Novosibirsk region for significant contribution to development of consumer market of the region, and high economic performance of the company.

AluminTechno has a modern K.SCHULTEN (Germany) test station installed for testing of finished ALUTECH façade, windows, door and roll-up constructions for burglar protection and resistance to static and dynamic loads.

Burglar resistance of ALUTECH sectional gates is confirmed with KOMO Certificate of Conformity (SKG-IKOB, the Netherlands).

Alutech LLC (Saint Petersburg) has won the “Region Developing Business” contest in nomination “Import Substitution” in the small and medium entrepreneurship segment, and has demonstrated excellent work results in 2018.

Based on the results of tests conducted in SPbGASU (Saint Petersburg) testing center ALUTECH has received:

ALUTECH has received a certificate confirming conformity of the Quality Management System to the requirements of ISO 9001 international standard in design, manufacturing and delivery of handling equipment.

AluminTechno JLLC became the first company in the Republic of Belarus that received a Certificate of Validation for materials and products used in construction of ALT150 suspended ventilated façade system.

ALUTECH has once again confirmed the high quality of products and receives tests report on conformity of:

The Declaration of Conformity to the European Union directives was prepared for ALUTECH SL series platform with rotating ramp, allowing to apply CE marking to the product.

Certificates of Validation received for use of ALT150 suspended ventilated façade system in construction in the Russian Federation.

A conclusion received from Melnikov Scientific Research Institute (Moscow) on the method of strength calculation of ALT VC65 stained-glass system with barrier railing.

Alutech Incorporated has conducted tests of new types of roll-up gates for conformity to the requirements of European norm EN 13241-1.

Alutech Incorporated LLC has tested new types of roll-up grates and rolling shutters for conformity to the requirements of European norm EN 13659.

Republican Honors Board-2013 was inaugurated in Minsk.
It lists the best companies of the year selected by state experts. Alutech Vorotniye Systemy plant was recognized as one of the industry leaders.

Based on the results of fire resistance tests conducted by French laboratory CSTB, ALUTECH roll-up systems were given class M1, which meets European norms and confirms the high quality of the systems.

ALUTECH GC was the first in Russia to conduct tests of roll-up systems in certified laboratories, thus establishing full conformity of the products to the new GOST R 52502-2012. The Standard is maximally harmonized with European standard for roll-up shutters EN 13659, and was developed on the basis of requirements established in the European Union for roll-up shutters.

Alutech Incorporated has received a certificate of conformity of roll-up profiles to the requirements of Ukrainian regulatory documents DSTU B V.2.6-3-95 (GOST 22233-93).

High quality of ALUTECH aluminum strip paintwork is confirmed by the tests conducted in BASF Concern laboratory in Germany.

Gate and industrial ALUTECH gates were subjected to a series of tests in TÜV International RUS Ltd for conformity of products to EU building directives in safety. Declarations of Conformity were received on the basis of the protocols, allowing to apply CE marking to ALUTECH sectional gates.

Comprehensive tests of shutter profiles as part of shutter canvas for resistance to wind loads in accordance with SNiP 2.01.07 were completed. Updated values of critical shutter profile characteristics were obtained – maximum dimensions (width and area) of roller shutters.

AluminTechno has conducted a series of tests of suspended façade and mullion-transom façade systems for the requirements of Ukrainian regulatory documents.

Issue of Certificates of Conformity to the European norms means acknowledgement of the high quality of ALUTECH products and permission to apply CE marking on it.

Certificates of conformity received for sectional gates in the National System for Conformity Attestation and in GOST R system, certifying their conformity to the regulatory documents of Russia and the Republic of Belarus.

Alutech Incorporated LLC has received certificates of conformity for roll-up blinds in the National System for Conformity Attestation.

AluminTechno JLLC has received certificates of conformity for pressed aluminum profiles in the National System for Conformity Attestation, GOST R and ROSSTROYCERTIFICATION systems, as well as the Ukrainian certification system. This has completed the process of certification of AluminTechno products in the markets of Russia, Ukraine and Belarus.

AluminTechno enterprise has implemented a Quality Management System in accordance with the requirements of ISO series 9000 International Standards, and has certified it in GOST R and TÜV CERT systems. TÜV Rheinland Group (Berlin) certification authority has issued a Certificate of Conformity to the requirements of DIN EN ISO 9001:2000. It covers the design, development, manufacturing, installation and maintenance of protective and envelope structures and their components.

Alutech Incorporated LLC has implemented a Quality Management System: TÜV Rheinland (Berlin) certification authority has issued the enterprise a Certificate of Conformity to the requirements of ISO 9001:2000. 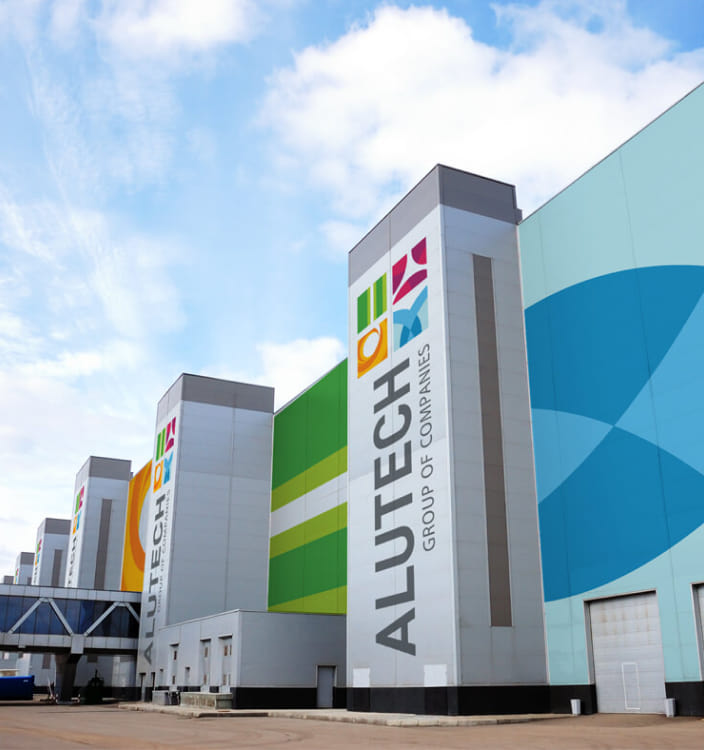 ALUTECH GC is traditionally participating in the biggest international exhibition of roll-up and gate systems, automation equipment and sun-protection constructions R+T in Stuttgart (Germany). The Company has presented to the European audience a combined 660 m2 stand with roll-up and gate systems, as well as own product line of automation equipment.

This same year the Holding, striving to expand its global presence, takes part in international construction exhibition WorldBuild Tashkent in Uzbekistan, and in international building forum New York Build 2018 in the USA.

ALUTECH GC participates for the first time in the biggest architecture and construction exhibition BAU in Munich (Germany), where it demonstrates aluminum profile systems for private and commercial construction.

The same year the Company expands its presence in the markets of Western Europe and South-West Asia, participating in exhibition of window-door and translucent products FIT Show in Birmingham (UK), as well as Do-WinTech Forum in Tehran (Iran).

ALUTECH GC is participating for the second time in wide-scale exhibition of design and architecture AIA Convention in Philadelphia (USA), and is presenting to the public its most demanded architectural-construction and interior systems, as well as a number of solutions developed specifically for the American market.

The same year ALUTECH products were shown at the biggest exhibition of building materials and technologies of the Middle East – Project Qatar.

ALUTECH Company becomes a participant of an anniversary R+T international exhibition in Stuttgart in Germany. This time the Company’s exhibition with the total area of 900 m2 became one of the five biggest ones. The brand products were presented in two exhibition stands: one demonstrated sectional and entrance gates, and automation equipment, the second one – relevant solutions for roll-up systems and product control. The exhibition has confirmed the status of ALUTECH as one of the leading suppliers of roll-up systems and sectional gates.

ALUTECH GC is expanding its geography, participating in the biggest specialized exhibition in the USA GlassBuildAmerica (Atlanta). Exhibition demonstrating ALUTECH aluminum profile systems was declared the best in Innovation category.

ALUTECH Company is going to the biggest industry international R+T exhibition in Stuttgart (Germany) for the second time. This time the Company has presented two stands with 400 m2 total area, demonstrating automated samples of roll-up and gate systems.

ALUTECH GC participates for the first time in the biggest specialized International exhibition of roll-up and sun-protection systems R+T in Stuttgart (Germany). Back then the area of the Company’s exhibition stand did not exceed 90 m2.

Since 2005 the ALUTECH Group is a constant participant on the biggest construction exhibitions in Belarus, Russia and Ukraine: